Watch out TV manufacturers, because within a few years we might not need your great big glass rectangles dominating our living rooms anymore.

I just borrowed the Anker Nebula Cosmos Laser 4K Projector for a long weekend and was quite impressed at what it was capable of as a bright laser powered portable video projector with Android TV 10 built-in. It really did feel like a cinema experience at home.

Specifications and What’s In The Box

Inside the box there’s a Nebula Cosmos Laser 4K, Remote, Android TV Dongle, Power Cord, 2x AAA Batteries and a Quick Start Guide. This box had already been opened by other reviewers and the dongle installed under the sliding back cover. A fresh from the shops unboxing would’ve looked tidier.

My first impression is that the Nebula Cosmos Laser 4K is a substantial rectangular unit at 4.85kg which gives it a solid feeling when hefted from one place to another.

Power, HDMI input, USB and AUX are at the bottom of the back, touch power and controls are at back of the top surface, vents are on the sides and the projector lens is on the front.

If you want to use your own video source like Foxtel, Fetch TV, Fire TV Stick 4K Max etc there’s an HDMI out port, as well as a USB stick/hard drive slot and AUX out to send sound to your home sound system.

The built-in speakers 2×10 watt mid range and 2x 5 watt high range are adequate for casual use inside and have plenty of volume available for use outside.

Audio can also be output via Bluetooth out which I used to watch and listen with my Sony WH1000XM5 headphones. Note there is a non adjustable slight audio lag for Bluetooth.

Auto Focus works very well, adjusting on startup as well as if you move the projector while it is running.

While running there’s a humming sound it’s not loud like an aircon unit so while watching something you won’t notice the hum.

If you’re worried about power use, when I turned off the projector my real time electricity monitor shows usage dropped by 163 watts which is very reasonable for an effective screen size of 150 inches.

You can control the projector via your phone using Nebula Connect app and cast to it with your phone/tablet using the built-in Chromecast functionality if you don’t want to use the projector’s Android 10 interface. There’s also a physical remote which handily has buttons to directly go to Netflix, Youtube, Prime Video and Disney+. The projector is properly certified to run Netflix in 4K and you don’t need to sideload the Netflix app like on some other cheaper Android projectors. 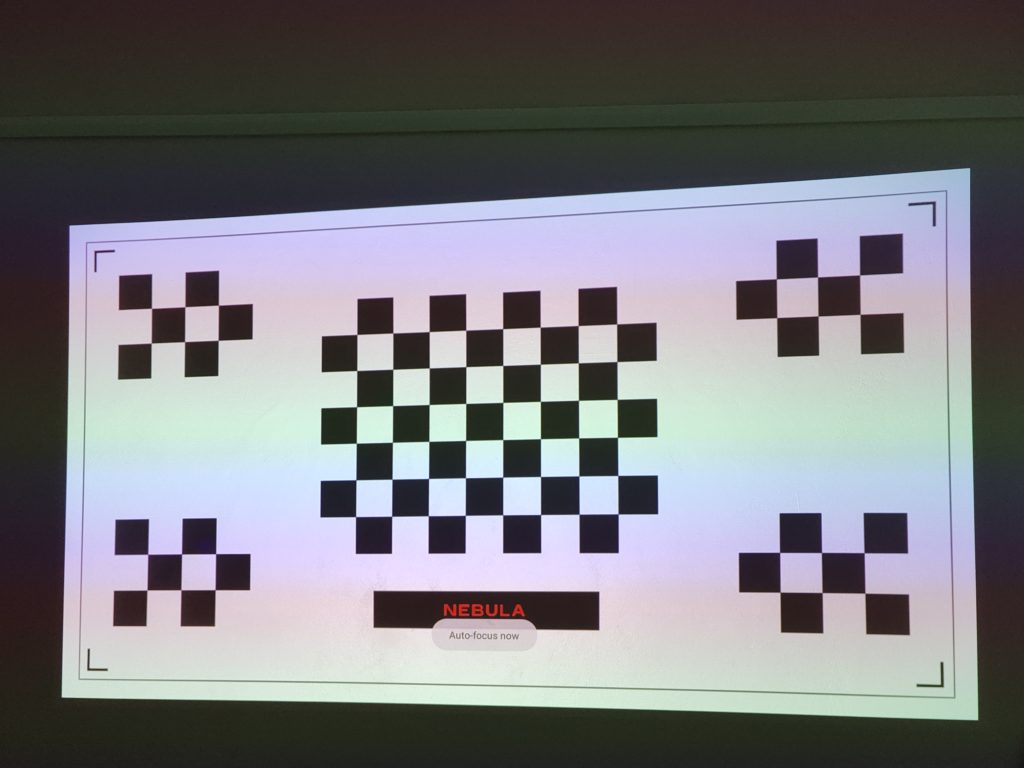 There’s no optical zoom so the only way to adjust screen size is to move the projector closer/further from your wall.

Digital Auto Keystone and Screen Fit are available to correct the image because you’re projecting onto a wall at an angle other than dead on 90 degrees.

They did work in my testing but using these will reduce image quality and sharpness so you’re best of trying to project straight ahead if possible.

While watching a dark gloomy spy drama the shadow detail wasn’t clear at times compared to bright superhero movies and animation where everything in scene was easy to see.

Should you buy it?

Compared to our usual 55 inch TV the Nebula Cosmos Laser 4K maximum projector screen size of 150 inches is a substantial increase to say the least.

There are things you need to think about before you get a projector such as where will it be located? The Nebula Cosmos Laser 4K minimum distance from wall is about 1.7m and maximum about 4.2m.

The built-in Android TV interface worked fine while I watched some of the new Kung Fu Panda series on Netflix and you can cast to it as well which I did to watch Ms Marvel and Doctor Strange in the Multiverse of Madness on Disney+.

While the promotional video implies you can use it outside in bright sunshine, this won’t work in reality. Even with a max output of 2400 ISO lumens you need to watch this projector in a completely dark room for best picture quality or at worst with a softly lit lamp in the room for people who aren’t fussy eg: children watching cartoons.

I’m not complaining though. For a gadget that you can just plug into power and put on a large box as temporary stand it’s very capable especially when you can move it to another room and have it set up to start playing again within a few minutes, that’s impressive.

While the current pricing of $4295 at JB Hi-Fi makes this device affordable to relatively few Australians, it gives a tantalising glimpse into what could be possible for many more people to enjoy once a future upgraded version costs less than $2000, is a bit brighter and handles ultra short throw, side-on angle, low/high projector location better via optical zoom & lens shift.

not pretty, but a lot of bad news is already priced in

Thu Jul 28 , 2022
Perfectly, that addresses just about … every little thing. Microsoft earnings release cited a litany of concerns: unfavorable overseas trade, prolonged productions shutdown in China, a deteriorating Computer marketplace in June, reductions in marketing expending and scaling down Russian functions. It left out frogs, boils, locusts, lice and hail, so the […]